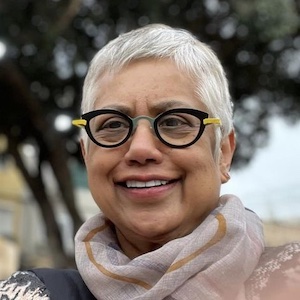 Associate Professor Lamia Karim is a cultural anthropologist with a focus on political anthropology. Her primary area of research is Bangladesh in South Asia. Her research interests are in women, globalization, development, the neoliberal state, religious nationalism, human rights, and social movements. Dr. Karim is the author of the much-acclaimed book Microfinance and Its Discontents: Women in Debt in Bangladesh (University of Minnesota Press, 2011), which is a critical examination of the Nobel Prize Winner, the Grameen Bank and microfinance practices, and their effects on women in Bangladesh. Her research has been widely published in peer-reviewed journals, edited volumes, blogs, and op-eds. Her pioneering research on gender, microfincance, religion and law has received major national awards and grants from the National Science Foundation, Harry Frank Guggenheim Foundation, Fulbright Fellowship Program, and Wenner-Gren Foundation for Anthropological Research.

Constructing Modernities: Women and Social Change in Bangladesh is a study of the changing roles of Bengali Muslim women from colonial to postcolonial modernity. Although modernity for Bengali Muslims was entwined with colonial modernity in the 1900s, it developed as a separate stream under Pakistan (’47 – ’71), and later under Bangladesh (’71-) that brought women into the public sphere as poets, educators, doctors, engineers, activists, politicians, and industrial workers. While the postcolonial state formation aided this process, it was women’s poractive roles that were pivotal in this dramatic change. The book is based on four sites are are revelatory of the transformations in women’s lives–literature, law, religion and labor. The book illustrates how women have creatively engaged with these sites to produce new social identities, meanings, and sexualities. While women’s live have made many positive strides, capitalism and religious nationalism have also redrawn women’s ability to take on new roles. Using ethnographic, archival and textual sources, Constructing Modernities analyzes this major shift in Bengali Muslim women’s lives from colonial to postcolonial modernity. The book is an important contribution in advancing our knowledge of women’s lives cross-culturally.

In my research on the readymade garment manufacturing (RMG) industry in Bangladesh, I examine how female garment workers who are part of the global commodity chain, encounter modernity in a dystopic industrial landscape. Bangladesh is touted as the “cheapest” place to manufacture clothes, and its workers are paid the lowest wages in the world while their labor is the source of a $20+ billion revenue stream for the country, and a major source of the country’s economic growth. The garment industry employs over 4 million young women, mostly poor migrants from rural to urban areas. The country is poised to become the #1 destination for readymade garment manufacturing as wages for the RMG labor increases in China.

Following the eight-story factory collapse in April 2013 that killed over 1,100 workers and injured another 2,500, the world has learned about the dire conditions and low wages under which poor women stitch clothes for major American and European labels. But while attention has focused on upgrading the safety standards in factories, less attention has been paid to the environmental and health consequences of industrial work on the female labor force. The research examines how workers’ political and social identities are changing through their roles as wage-earning factory workers. The research examines the changes in health, family life and sexuality among these young women who are between the ages of 15-35 years. My research examines to what extent trade union activism has made workers aware of their rights as labor, and empowered them to bargain for better working and living conditions.

The New Silk Road: Perspectives on the Asian Highway from Bangladesh

The third project is on the Asian Highway that China is building as a trade route through Asia. The project is jointly conducted with Dr. Mannan of Independent University of Bangladesh. The research focuses on the cultural-politics of the Asian Highway and its regional manifestations by taking the port-city of Chittagong in Bangladesh as an exemplar of globalization. The Asian Highway from Kunming province of China will pass through the politically volatile regions of North-east India, Myanmar and south-east Bangladesh to reach the deep-sea port in Chittagong. The Highway has been theorized as generating regional connectivity through an increase in trade that will bring the peripheral regions (Bangladesh, Myanmar and NE Indian provinces) into greater co-operation with the two Asian giants, India and China. Yet, the Highway is also a metaphor for new modes of communication, social identities, and dislocations in the populations living in these areas. Thus, it can be argued that the Highway will not necessarily lead to a disciplining of resistance, but instead, it may collapse existing separatist movements into alliances against the Chinese, Indian and Bangladeshi states for regional autonomy, and change the borders of these peripheral states.

a) Law, Religion, and Democracy: The Case of Bangladesh

The project analyzes the role of women belonging to a transnational pietist movement known as Tabligh Ja’maat. The research projected conducted over six months (Fall 2009-Winter 2010) examined the social and sexual regulation of women through their induction and participation in the Tabligh movement. The project findings are under analysis during Fall 2010 through Spring 2011.

The Tabligh movement is located around a central mosque leadership. Since the spread of globalization and media culture in the 1990s, the mosque leadership has brought women into the movement not as passive recipients but as female missionaries who recruit women into their growing movement. The project is a study of these social challenges that are changing roles of women, and also transforming the pietist movement into a political movement.

The second ongoing project is a cultural study of violence against women through the life histories of women who have been physically burned by sulphuric acid by men who had been spurned in their sexual overtures to these women. These acid survivors have formed a music group, Ponchom Shur (Fifth Note), to heal themselves through songs. Despite tremendous social adversities, these women continue with their education, employment, fall in love and marry, have families, and try to live normal lives. The project is a study of the human spirit, and the recognition that women are not simply victims, but creators of meaningful destinies.