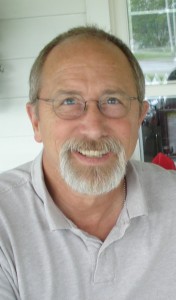 Dr. O’Neill is an archaeologist who has been with the Museum since 1989. He has done field work in Missouri and Kansas, and in the Pacific Northwest in Washington and Oregon. He has directed archaeological research throughout Oregon, but the focus of his work has been the interior valleys of the Willamette, Umpqua, and Rogue River drainages. He is particularly interested in documenting the early Holocene (pre-Mazama) in the western Cascades. Research interests include complex hunter-gatherer-fisher societies, obsidian studies, residue analysis, and the use of GIS in CRM and predictive modeling. O’Neill has authored and edited volumes in the University of Oregon Anthropological Papers, the Bureau of Land Management Cultural Resource Series, and has contributed articles to the Association of Oregon Archaeologists Occasional Papers Series. He has also written on Native rock art in Kansas.

© University of Oregon.  All Rights Reserved.

UO prohibits discrimination on the basis of race, color, sex, national or ethnic origin, age, religion, marital status, disability, veteran status, sexual orientation, gender identity, and gender expression in all programs, activities and employment practices as required by Title IX, other applicable laws, and policies. Retaliation is prohibited by UO policy. Questions may be referred to the Title IX Coordinator, Office of Affirmative Action and Equal Opportunity, or to the Office for Civil Rights. Contact information, related policies, and complaint procedures are listed on the statement of non-discrimination.